The three phases are defined by three Relics placed by Artificer Xy'mox. These change based on the boss's health:

Artificer Xy'mox has four abilities that he will use throughout the entire encounter.

Dimensional Tear should move far from one another!

This mechanic is used to counter a large portion of the bosses abilities, primarily the "relic" abilities throughout all three phases.

Moving into a wormhole instantly teleports you to the other one!

Around every 30 seconds, the boss will cast

Glyph of Destruction on the current tank, dealing moderate arcane damage every second over 4 seconds.

Arcane Vulnerability to the afflicted tank, increasing arcane damage taken by 50% for 45 seconds. 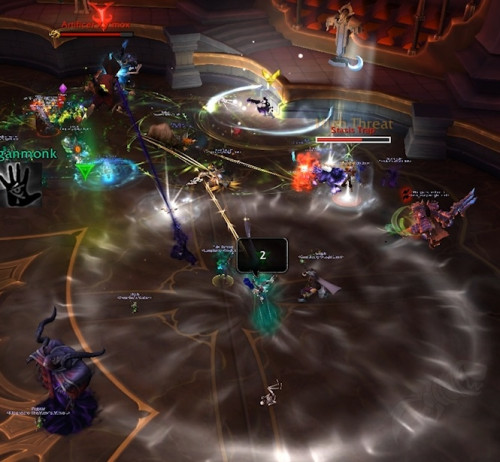 The boss will occasionally cast

Rift Blast, which spawns several portals next to random players. 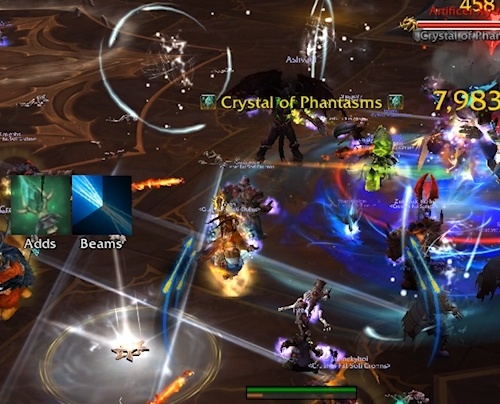 Avoid standing in the path of the

30 seconds into the encounter, a large green crystal appears in the air above the middle of the room.

Kite the Fleeting Spirit to avoid being mind controlled!

To counter this, place the Dimensional Rifts on opposite sides of the room. 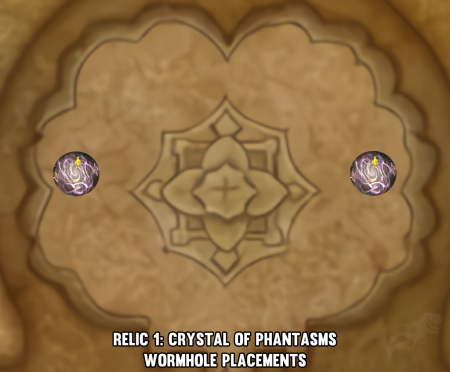 Place the portals in the position shown in this map!

Shortly before spawning a wave of Fleeting Spirit adds, this crystal will deal low shadow damage to several random raid members over a 4 second duration.

Crystal of Phantasms will remain active until the boss reaches 70% health.

Crystal of Phantasms has despawned, the boss will summon a gnarled staff that floats in the air above the middle of the room.

Pick up the seeds, throw them away from the raid and then use the wormhole to return!

To counter this, place the Dimensional Rifts on opposite sides of the room in the same way as you did for the 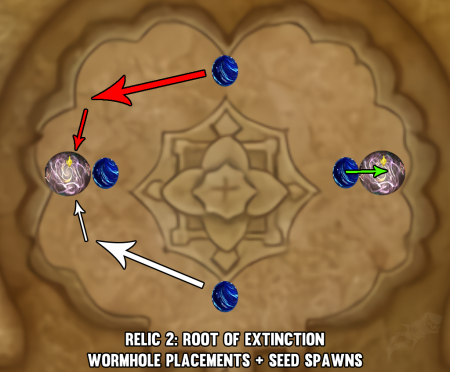 Place the wormholes and move the seeds as shown in this map!

Shortly before spawning a set of seeds, this relic will occasionally apply a nasty 21 second

Root of Extinction will remain active until the boss reaches 40% health.

Root of Extinction has despawned, a large sword appears in the middle of the encounter space.

To counter this, place the one Dimensional Rift near the raid and the other next to the sword in the middle of the room. 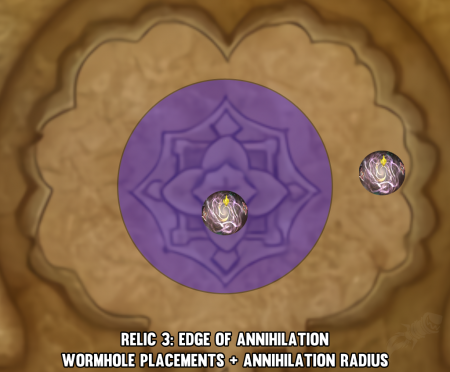 Place the wormholes in the positions shown in this map!

This ability can also be countered by running against the wall with a large movement speed increase, such as

Use the wormhole to quickly leave the

Glyph of Destruction is applied to the tank.

Whilst this relic is present in the room, all players will be taking low shadow damage every 3 seconds. This damage is unavoidable.

Edge of Annihilation will remain active until the boss is dead.

10 seconds into the encounter, and every ~30 seconds after that point, the boss will summon several

Stasis Trap at the location of random players.

Avoid standing within the armed

These traps can be triggered safely by somebody using a magic immunity/deflection.

Root of Extinction is active, it will spawn 8

Seed of Extinction, up from 4.

Seed of Extinction - however the dungeon journal has since been updated to indicate that 8 spawn instead. We are unsure if this is an error or not. 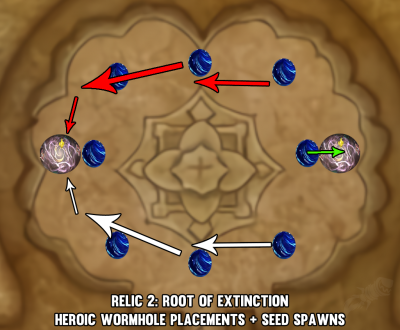 Additional players need to get involved in moving the seeds!

If a player comes into contact with the Fleeting Spirit that is fixating them, they will become mind controlled until they are slain.

On mythic difficulty, the relics spawned by the boss will remain active for the rest of the encounter.

We expect that the standard placement for

Although the powerful abilities these relics cast may be the first thing that comes to mind when thinking about having all up at once, a hidden killer is the other spells the relics cast.