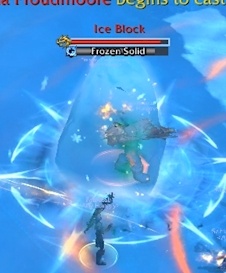 Free players who are

Throughout the encounter, all of Jaina's abilities will also apply a stack of

When the raid uses Bloodlust/Heroism/Time Warp, Jaina will immediately cast Ice Block which makes her invulnerable for 20 seconds.

During phase one, the raid will be fighting Jaina whilst on a Zandalari Warship.

Instead of melee hitting, Jaina will spam cast

Ice Shard at the current tank.

Jaina will mark the tank with

Avalanche. This is also applied to two other non-tank players on heroic mode. 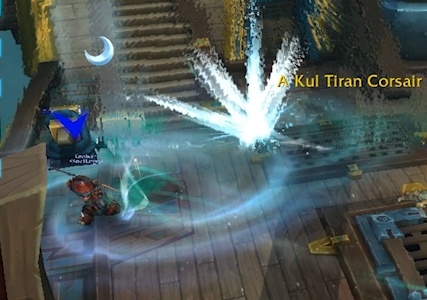 Move away from allies when marked with

Grasp of Frost on a random player, dealing a moderate burst of frost damage and rooting them for 8 seconds. 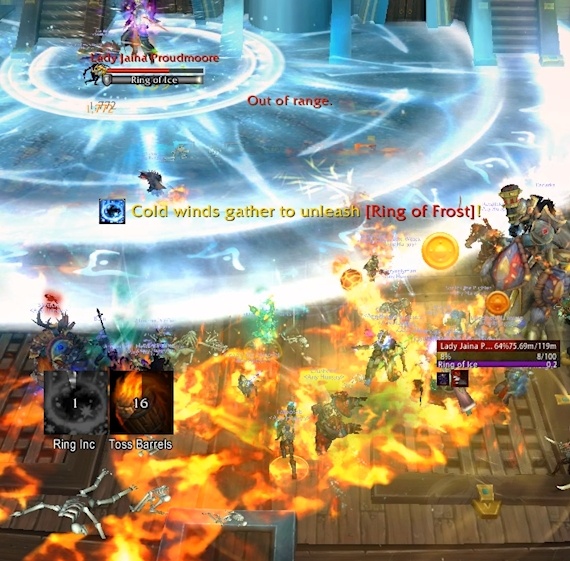 Stand away from Jaina and within a

Jaina will face a player and begin to cast

Upon reaching 100% energy, Jaina will either teleport a short distance in a random direction and cast 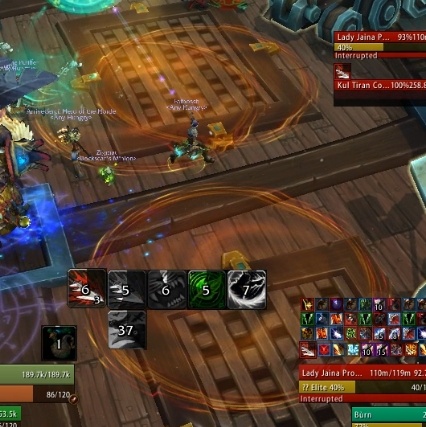 15 seconds into the phase, and every minute beyond that point, a Kul Tiran Corsair will pull along side the Zandalari Warship.

Avalanche will be permanently removed from the encounter.

The Corsair will continue to

Bombard the Zandalari Warship until it is repelled by players who interact with the Zandalari Ballistas that are found along either side of the ship. 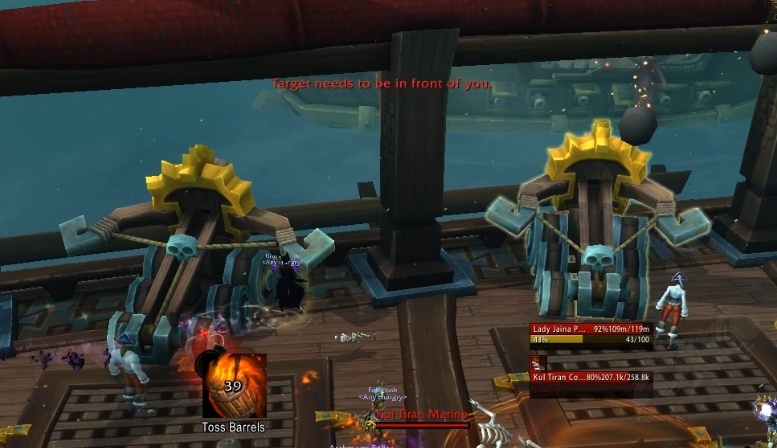 Interact with the Zandalari Ballistas to repel the Corsair! 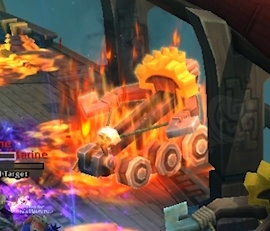 Put out on fire Ballista with

Bombard will be set ablaze, rendering them unusable until they are put out again via an

When the Corsair arrives, two Kul Tiran Marines will board the ship, landing towards the stern (back) of the ship.

Set Charge, the Marines will cast

Marked Target on a random non-tank player and chase them around, melee hitting them whenever they come into range. 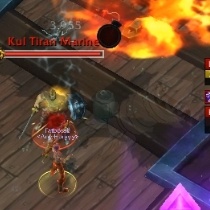 Pick up the barrels and
throw them overboard!

Once the raid has gotten Jaina to 60% health, the first intermission will begin.

Jaina will teleport away and an unskippable cutscene will begin. At the end of the cutscene the ship will come to a standstill and a large ice arena will form at the Starboard side of the ship. 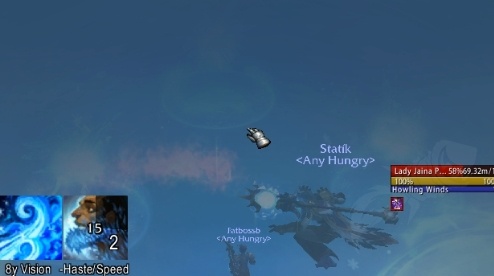 Glacial Shards can be hard to see...

Whilst travelling through the

Blistering Tornadoes which roam slowly around the area. 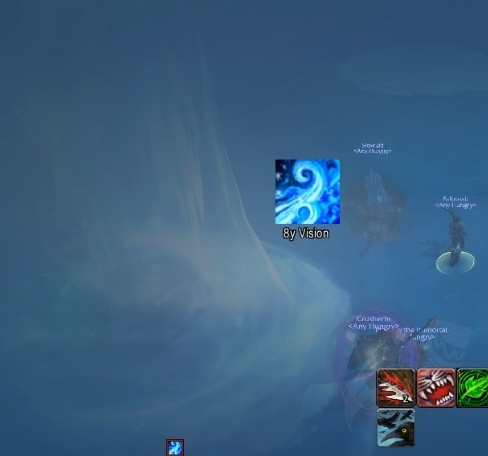 Raids may wish to send one highly mobile player with an immunity ahead to interrupt Jaina.

During phase two, players engage Jaina on the Frozen Seas. This causes players to receive a stack of

Four Unexploded Ordnance barrels will be placed around the encounter area. Three will be present on heroic difficulty. 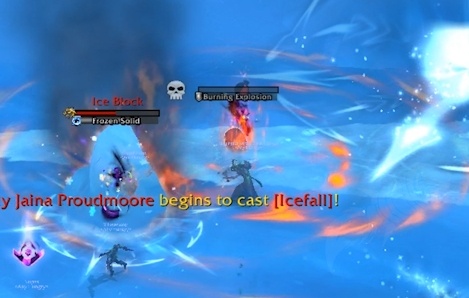 Burning Explosion to remove your

The flagship will occasionally mark several players with a 6 second debuff which deals moderate arcane damage every second.

The four Unexploded Ordnance barrels will not respawn and are therefore a limited resource that must not be wasted. 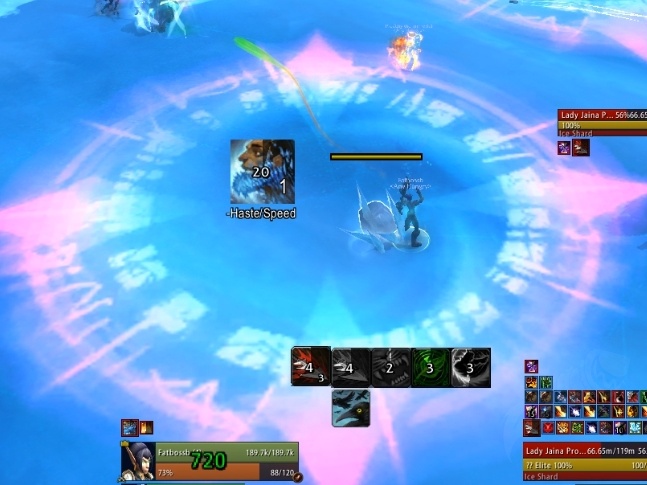 Broadside on the barrels to remove their

Occasionally, a single random non-tank player will be marked with

The raid should move around the encounter space as a single unit throughout the phase, having players afflicted with

Siegebreaker Blast move away when needed. 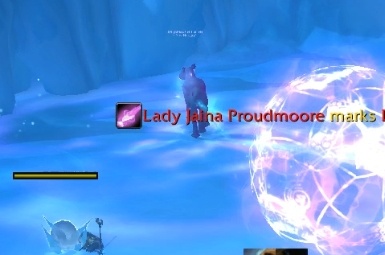 Move far when targeted by

Ice Shard ability from phase one, however tanks cannot let the

Avalanche in phase two, but the ability has been altered. 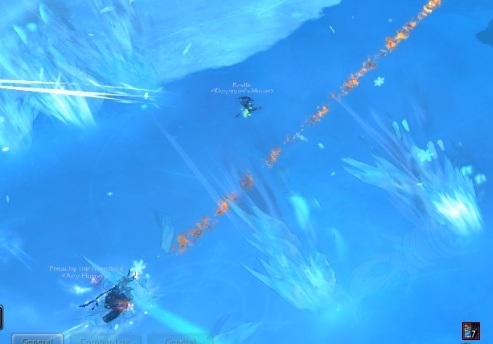 Don't get hit by the

Jaina will face a random player and channel a

Glacial Ray towards them, creating a large line of frost in their direction.

Move out of the

Occasionally, Jaina will mark one side of the encounter space with 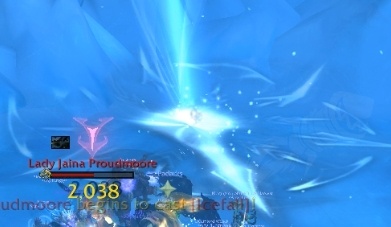 The white arrow indicates the direction the comets will land.

Upon reaching 40% health, Jaina will teleport to the centre of the encounter space and the second intermission will begin.

The entire raid needs to leave the current encounter space. This is done by destroying the Wall of Ice which has now become attackable in the north-eastern side of the arena.

Once players bust down the wall, they will have extra space to move away from the

Flash Freeze, but it will eventually expand into this area.

Jaina's Tide Elemental needs to be tanked and will apply

The elemental has an energy bar. Upon reaching 100 energy it will cast

Players should avoid freeing Nathanos from his tomb immediately, instead opting to kill him when they are starting to run out of free space due to the incoming 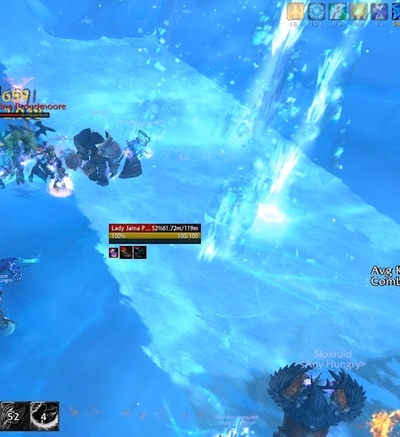 Do not stand in the path of

During phase three, players will need to fight Jaina without any heat sources to remove stacks of

Chilling Touch, which is now being applied passively every 10 seconds, up from 6. This will inevitably lead to the raid becoming

Icefall abilities. The Proudmoore Flagship will also continue to cast

Any player who becomes

Frozen Solid will cause Jaina to spawn a

Shattering Lance near her.

Jaina will also summon a

The encounter will be complete once Jaina reaches 5.5% health.

Set Charge munition barrels will explode after 15 seconds, down from 40.

Bombard spell will also knock any players hit by the spell back.

Ice Shard will give apply a stacking debuff on the tank which increases the damage they take by the ability by 10%.

Time Warp during phase one, increasing her haste by 30%.

During the first intermission, Jaina will teleport to a random location in the ice arena, rather than the middle.

During the second intermission, Jaina's Tide Elemental will frequently cast

Water Bolt Volley, dealing a large burst of frost damage to all players.

Players need to stand within the

Orb of Frost, it is unlikely that the raid will be able to "zerg" Jaina down before the entire group will be