Conclave of the Chosen

Conclave of the Chosen

Conclave of the Chosen Abilities & Strategy

The encounter begins with the raid facing against Pa'ku's Aspect and Gonk's Aspect. When either of these are killed,

The order in which the aspect bosses join the encounter is set and will not change, regardless of what order you defeat them in.

As the remaining aspect boss will heal back to full health, DPS should not actively look to cleave or multidot the aspect not currently being focused down.

When two aspect bosses are within 7 yards of one another, they will gain the

Each aspect boss has abilities which they will cast themselves, as well as one Wrath ability cast by the Loa they represent.

Each consecutive melee attack against the same target will increase the attack speed of Pa'ku's Aspect by 8%.

Gift of Wind, applying a 15 second magical buff to all enemies, including both bosses and any adds.

Every 70 seconds, Pa'ku will appear in the middle of the encounter area and fly to one edge of the room. Paku cannot be interacted with. 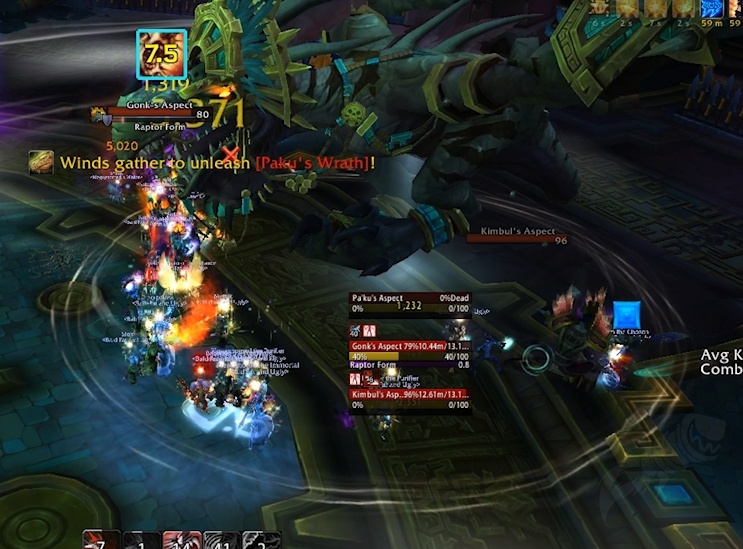 Stay within the safe zone during

Gonk's Aspect will frequently transform in a

Wild Maul at the tank, dealing physical damage to all players in a 9 yard 90-degree cone directed at the tank every 0.5 sec for 4 seconds. 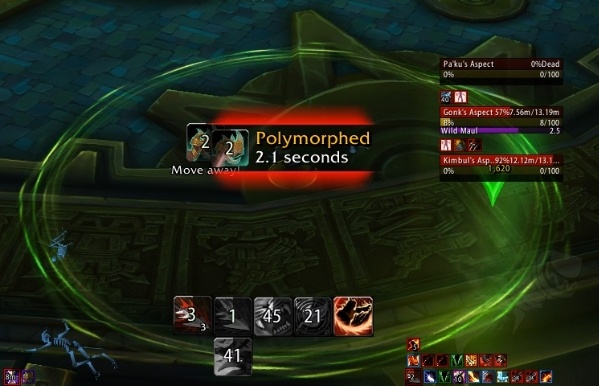 Move 8+ yards away when you have the 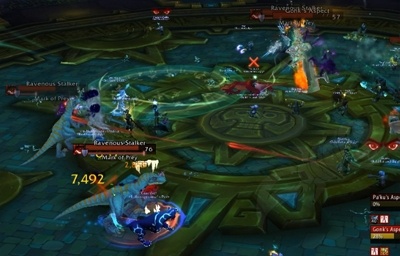 Every 60 seconds, Gonk will appear in the middle of the encounter space and cast

Gonk's Wrath. Gonk will then despawn. Gonk cannot be interacted with.

All DPS should quickly switch to the Ravenous Stalkers to kill them off as soon as possible.

Gonk's Wrath can be cast during a

Once either Pa'ku's Aspect or Gonk's Aspect has been defeated, Kimbul's Aspect will join the encounter. 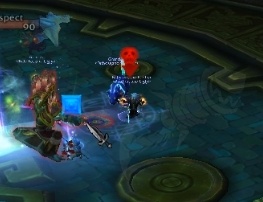 Move away from others when
marked by

Every 60 seconds, Kimbul will appear in the middle of the encounter space and mark multiple players. Just like the other Loa, Kimbul cannot be interacted with.

Thundering Storm, creating a 10 yard zone around herself which will detonate at the end of the cast, dealing high nature damage to any player within it.

Move away from Akunda's Aspect when

Mind Wipe magic debuffs to mutliple players. This 30 second debuff causes the player to "forget" all of their abilities whilst the debuff is on them.

Spread out when afflicted by

Every 60 seconds, Akunda will appear in the middle of the encounter space and cast

Akunda's Wrath before spawning. Just like the other Loa, Akunda cannot be interacted with.

Akunda's Wrath will cast 30 seconds after Akunda's Aspect enters the encounter. It is vital that players do not kill the previous aspect boss at a time which will cause the

Akunda's Wrath to overlap with a

Once Akunda's Aspect joins the fray, the raid should defeat Kimbul's Aspect next, as he has a stack of the

Cry of the Fallen

Whenever an aspect boss is defeated, they will let out one final spell

Cry of the Fallen.

Whenever Ravenous Stalker adds spawned via

Gonk's Wrath are within 5 yards of one another, they will gain the Pack Hunter buff. 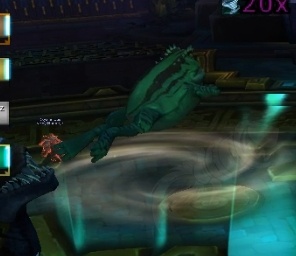 Move away from the landing location of Krag'wa!

Krag'wa's Wrath. Krag'wa does not have an aspect boss associated with it.

Krag'wa could theoretically be baited into jumping into two separate groups of three players, allowing all other players to ignore the mechanic.

This section of the guide will be updated when Conclave of the Chosen is defeated on mythic difficulty on live servers.

Bwonsamdi's Wrath. Bwonsamdi does not have an aspect boss associated with it.

Healers need to ensure that the

Bwonsamdi's Wrath debuffs are dispelled at the correct times to allow healing on an afflicted player.

As the fight progresses, more and more

Bwonsamdi's Wrath debuffs will be present on the raid.